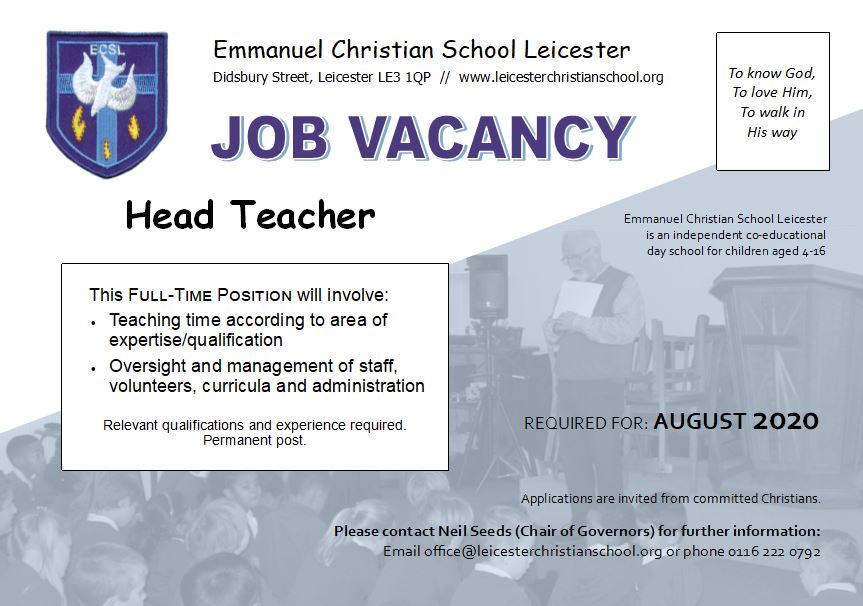 Emmanuel Christian School, Leicester, has grown out of a vision given by God to a number of people.

In November 2001, the need and desire for a Christian School was expressed by some parents. A small group of people started to meet together to pray and seek God’s will and a public meeting was subsequently arranged in January 2002. As a result of this meeting, a Steering Committee was set up under the heading of 'Leicester and Leicestershire Christian School Project'. The Steering Committee met regularly and further public meetings were held. Visits to schools also were made and contacts were established with people who could help us. People started to commit themselves and their children to the school and it was clear that God was working among us to ensure His work would be done.

We then began to look for suitable premises: At a committee meeting on 19th May 2003, following much discussion and prayer, we accepted the invitation from Braunstone Evangelical Free Church to use their premises on Didsbury Street.

By God’s grace, the school opened on 28th August 2003 with 11 pupils of Primary School age. The school then expanded to a secondary phase in September 2005 for Years 7, 8 and 9.

In September 2013, after much prayer and planning, we began Key Stage 4, teaching 8 GCSEs to a group of 4 students. They sat their exams in June 2015 and each gained 5 A*-C grades including English and Maths. These results have been a great encouragement to us. Our students have continued to achieve good GCSE grades and moved onto colleges, universities and the work place.

Our numbers have grown steadily. We now have 54 on roll. Our staff team has also increased. We now have 19 paid staff and over 12 volunteers who teach small groups and assist the teachers.

At our Ofsted inspection in June 2018, we were given a 'Good' rating.

The Full-time position with involve:

For full details view the Job Description attached below.

For more information contact Neil Seeds via the school office: office@leicesterchristianschool.org or 0116 222 0792